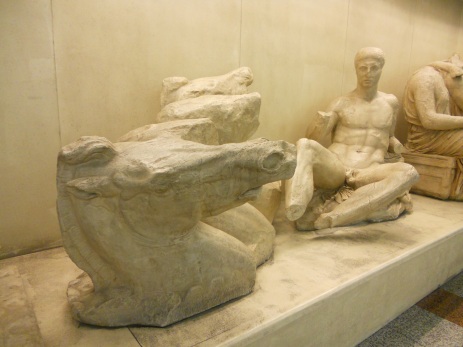 Some pieces from the pediments on the Acropolis

Eek. This would probably have been a very nice piece of art if they still had heads.

Today was an alright start at 8:30AM-after a humid breakfast in the heat we walked over to where (as I told you already in the last post) on the previous day the friendly American on a Segway had told us to go if we were looking for said rides around the Acropolis. The shop, located on 9 Aischinou & Frinihou Street, Athens 10558, Greece had only just opened for the day and we were the first ones to be given a tour.

Taking the one hour tour we started off firstly with adjusting helmets and getting used to our Segway’s-me and Charlie were pretty seasoned, as we’d already been on Segway’s before whilst in Vigo during our summer cruise, although that was mainly aimed at tourists (like ourselves) and the management and health and safety wasn’t great-some of us didn’t get helmets, we didn’t really practise enough with our Segway’s and the groups went off in large parties of about fifteen-twenty people, which meant when we stopped or were going down the streets it was pretty hard not to crash into anything-or anyone. However with this company, they mentored us for about twenty minutes-spinning, reversing, sharp turns and how to get off-so even the most novice rider could be pretty nifty at it when you were done.

We started by rounding the long road next to the Acropolis and passing the Acropolis Museum and the Philopappus Monument site, continuing until we reached the Athens Observatory. The Observatory was created in 1842 and nowadays researches in three different main aspects: Astrophysics, Sustainable Development and Geodynamics1. Although the doors were barred to us as we had a look round there was one dead-looking large brownish dog leaning against a sprouting marble fountain shooting out clear turquoise streams of water.

After staring at the dog for what seemed like an eternity, we returned to our Segway’s and went down the hill to reach the sector our female tourguide called ‘posh Athens’-if massive potholes, bridges graphitised to the point that they looked like a three year olds interpretation of rainbows and many many cats seem like a good place to you, that is. Eventually we drove back on the long winding path which was situated next to the Acropolis before finally getting back to where we began after about an hour of sightseeing. 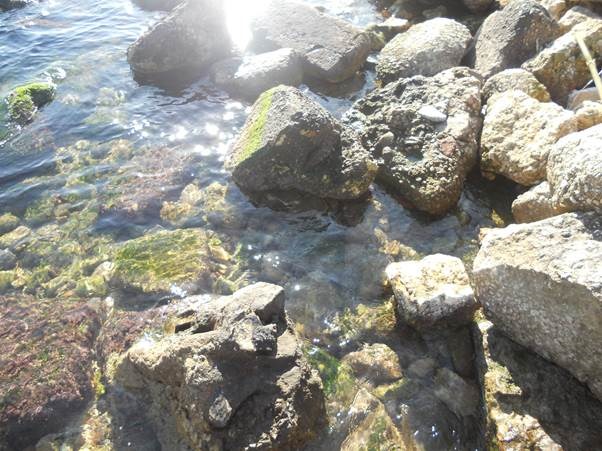 There was no time to waste however, when we were done, as we had arranged to meet up with someone in Piraeus, which is located on the southwest coast of Athens and has a beautiful view of the sea, as well as proper sand beaches. After arriving at the city through the stuffed and old metro train my brother and father met up with the person as me and my mum walked over to one of the nearby beaches where instead of the fine yellow sand there were large sharp rocks placed in an almost artistic fashion, precariously balancing atop one another. Ignoring the large quantities of plastic bags, bottles and various pieces of junk I decided to go for a bit of ‘rockpooling’. They weren’t real rockpools obviously, but I managed to find a couple of reasonably interesting things to keep a thirteen year old introvert satisfied: whelks, a clam in its crystal-coloured shell, one lone mussel, barnacles, bleached dead coral, red seaweed and sea cress? (Not sure what it’s called) It was interesting to me at least. You can go play on the beach or whatever if you go yourself later.

I Was Here: Standing on the rockpools with a newfound bamboo stick.