Thankfully we woke up a little later today and had plenty of time to gobble down most of the sausages and grapefruit juice the breakfast bar still had left when we got down. A bit lost at what to do, we finally decided to firstly go Parliament before going to the Museum of Classical Archaeology.

The Parliament courtyard was crowded when we arrived at the infamous chalky-yellow coloured building which has been attracting so many headlines lately (tut tut) not with tourists but pigeons. Absolutely hundreds of them. A small collection of old men were selling husks of bread to feed them in the courtyard, whereupon you would be assaulted by five hundred flapping wings in your face within seconds of receiving it. They literally jump onto you like a savage cat, claws out and ready-I highly disapprove the idea of feeding them (as much as I find them pretty cute, but then, I do talk to animals. At school. I’ve made acquaintances with the local robin *smug face*).

Soon enough however the bombardment of pigeons was cleared up for the changing of the guard, which also happens at Buckingham Palace if you didn’t know. Three soldiers and their commander briskly marched through the crowd, red berets and all, before switching places with the soldiers already standing on post. Within minutes everything went back to normal and the amazing event all the tourists had been waiting for for hours was over, berets and all. We decided to leave Parliament and take the tube to the Museum of Classical Archaeology as we had planned.

The three soldiers and their commander

The Museum of Classical Archaeology

The front view of the Museum

When we arrived at the Museum I was completely awed by the amount of incredibly well preserved statues, objects and fragments all from the Ancient Greek times, including the Artemision Bronze, discovered off the coast in a shipwreck of Cape Artemision in Euboea(1). It’s either a depiction of Zeus or Poseidon, although most people believe it’s Zeus since he is usually depicted with his arm raised, who should have been wielding a thunderbolt (or a trident if it was Poseidon). It’s apparently one of the few preserved and original Severe Style statues, which provide explicit detail on motion and the body. I saw a plaster cast of the statue last summer when I went to the Museum of Classical Archaeology Cambridge on a school trip. That was a pleasant surprise. Oh, and this is the website if you were wondering. 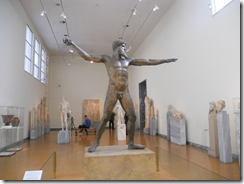 The Artemision Bronze-Zeus or Poseidon?

As well as the Artemision Bronze, there were some other fascinating pieces of art, including a bust of Athena (which I did a pretty bad drawing of, if I say so myself) , some kouros[es?] and another sculpture found off the shipwreck of Cape Artemision called the Jockey of Artemision, which is a young boy riding a horse. It’s apparently one of the rare pieces of Ancient Greek artwork of horse-racing, so it’s lucky we have it! The eerie holes in both the Artemision Bronze and the Jockey were the eyes and eyebrows should be were once bone.

There was also an upper and lower section, the upper showcasing a whole array of pottery and frescos and things used in everyday life, whereas the lower section had jewellery ranging from gold leaves to bronze tripods (whatever they are) taken from mass graves or tombs. I tried to make the most out of it, but I really haven’t studied this part of history that much, even though I know about Mycenae and the Neolithic era and all the different Bronze Ages-*sigh*well, back to more Horrible Histories for me. Or I can find something more challenging-I mean, I am reading How to Kill a Unicorn-sounds cute, but really it’s about, and I quote: ‘build bold ideas that make it to market, transform industries and deliver growth’. As well as the author of the book being the founder of Fahrenheit 212, whatever that is. I don’t know, it’s not like I study economics! Anyways, my point is, if you know any good history books, feel free to tell me-I’m reading one now, but I need a few for after I finish it. 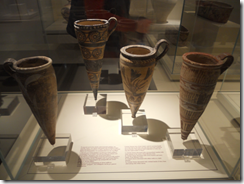 They’re called conical rhytons, and were used for rituals, although they just look like oddly shaped amphoram to me (wine-jugs)

A beautiful picture that decorated the staircase to the upper floor. 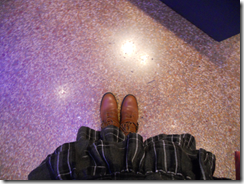