The Plaka was a lovely place, situated in a little part of Athens called Anafiotika which is where we went. The journey however, was also pretty memorable, and for one reason-cats. 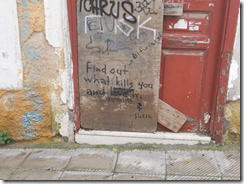 Even the cacti want to join in.

Gingers, tabbies, greys, albinos, patched ones, even a pair of tiny little kittens huddling underneath a canopied shelter to get away from the rain-cat lovers can just walk here, scoop up the first cat they see and leave with it all snuggly in their arms like a big fluffy cushion. (I wouldn’t advise you on doing that though.) There are a couple of dogs to, but most of them look like they’re staring death in the face and don’t like what they see-all flabby skinned, lean, dogged looking things that just lie on the floor sleeping-I think. The pathways are ridiculously narrow and hardly anyone else is there-just brightly coloured little cottages and orange brick rooftops, most likely with a cat sitting on them. It was about as easy to see a cat in Athens as seeing a…ahem…faeces in Toulon. God that was such a miserable place.

A fun little mosaic bull! On someone’s wall in Anafiotika.

“The smart tourists go to the Plaka…”

Eventually, after lots of walking in the now pouring rain, we eventually found a street in Anafiotika that was full of restaurants. It seemed that the lower you went down the street-we were at the top of this slope-the pricier but more full the restaurants got. The food also seemed to become more tourist aimed. Oddly enough, the restaurant at the top-which I think was called Anafiotika but I’ll put a picture up anyways so you can see their sign-was practically empty apart for a couple of smoking dudes and a cheerful-looking duo of dancing men (but they weren’t dancing yet, just smoking.) We decided to go here anyways because it was super cheap-and because there were cats inside. Hee hee.

We didn’t get too much-a Greek salad to share with heapfuls of what seemed like the entire creation of homemade humus as well as minestrone-ok, not exactly Greek but delicious all the same! (Well, actually I’m quite picky about food-sorry environmentalists-and though it might not seem it at school-the girls can be as picky as female spiders sometimes-I actually don’t eat quite a lot of those things. Now, one of those things is celery. Another is onion. Raw tomatoes. Garlic, olive, peppers. Do you want me to keep going? Cause I can go on all day long. Basically, what I’m trying to say is that I didn’t actually have the minestrone. I heard from Lews though that it was good, so there we go. And I only had parts of the Greek salad. Gosh I sound like such a pain don’t I?)

The Greek salad and humus. Sorry about the lighting! I should probably get a new camera, it’s just that it’s…pink. 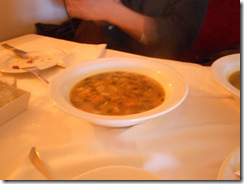 For mains, I had this amazing seafood spaghetti dish for twelve euros-it contained two whopping big black tiger prawns (unfortunately my mother ate both), calamari, mussels, regular shrimp as well as a rich and intoxicating tomato sauce. This was all served in a massive serving enough for three people, especially because of those big prawns! Overall, a very delighted customer at Anafiotika. Afterwards we took up a little dancing session with the two men I was talking to you about before, it was so fun! Thanks a lot to those guys and also to the staff at Anafiotika for being so sweet and welcoming-they even gave us all a free dessert!

We started walking back the way we came, but this time we passed through some shops and I bought some souvenirs for my friends-magnets, bath soaps, that sort of thing. We also had a quick peak at the Temple of Olympian Zeus, but didn’t go in. And we also passed by Hadrian’s Arch-not the wall up in Scotland, mind you. By the time we got back to the Herodion Hotel it was already late afternoon and the sun was painting the sky this bright, rosy orange pink over the glistening turquoise waves of the Mediterranean seas. To catch a better sight of this we rushed over to the Philopappus Monument, which was located at the very end of the road next to the Acropolis, and was almost like a blue-barred forest of a park-lush trees and grass everywhere, and hardly anyone there. It was mesmerising walking through that jungle to the peak at the top of the mountain, where we got an amazing view of the Acropolis as well as the actual monument there. It was so beautiful I wouldn’t mind staying there myself for a bit. No one would know… 😉

Where Am I? Same as before. Should be easy since it’s where I was just talking about.

After taking some pictures atop the rocks at the peak of the hill we descended back down. I went into another souvenir shop and bought yet another magnet (it’s pretty shoddy-I had to put it on top of something to stop the magnet from just falling off the fridge-and it cost me three euros) and a metal eagle. Once again, this seemed to be hinting more at Rome then Athens but oh well, maybe I’ll buy another one when I go to Campania and Naples. (As if. I’m just stuck in drizzly Old England. Not even New England.)

Charlie’s ‘When in Rome’ face

🌸Lotus Flowers at the Summer Palace 🌸
Don't be spooked, he just wants to say hi 🥺
Flowers for the end of the world 🌸
~🎐dreams and wishes🎐~
Follow Nutty Things on WordPress.com