Independence of the Seas – Day 9 – Toulon and Marseille

Awoke to the stormy seas of Toulon, a desolate and ghost-like city with a small group of people mainly centred around the train station. It was wet, it was rainy, and it was downright miserable as we hunkered around the city waiting for our train to arrive. We visited one little shop next to the filthy canal water-filled with plastic bags, bottles and shopping trollies, inevitably-which at first seemed humble and quaint but turned out to be filled with throwing stars, swords, guns, crossbows, and the like, some not even kept in glass cages but instead left there hanging for your enjoyment. *smirk*

It had seemed alright at first, this place. When we got off the ship a cheerful looking fluffy dolphin suit man working for the cruise came up to us and gave us an enveloping hug. Snuggly…

But it was not to last. When our train eventually arrived, dirty and shoddy, and drove us over to Marseille, we found ourselves bombarded by an interesting collection of…faeces, let’s have it. No, I’m not kidding, I counted 63 of them in the short two-three hour period of time we had in Marseille. Gods above. (May Skyrim save us) 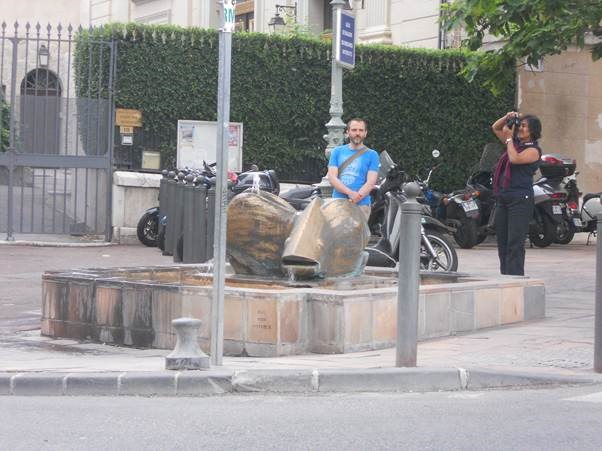 I just…don’t even ask.

‘We found ourselves bombarded by an interesting collection of…faeces, let’s have it’

The place itself was pretty run down, rather like Marseille. The majority of people we passed acted uncomfortably like chavs and there was graffiti heaped all over the walls. The Church we went to was surrounded by beggars and the homeless wanting money, and the only solitude we could find was inside the Church, a large marble structure with a domed top and higher balconies on each side. Colourful banners not unlike the ones in the Wheel of Time (check it out!) hung proudly on stands on the sides of the walls and everyone finally shut up.

Some weird and wacky graffiti…

…as well as the just freaky. See the clown in the bottom left?

When we got back to the main part of the city, right next to the canal waters we went to have lunch and one of the many fish soup-serving restaurants aligned along the more tourist-attracting areas of the town. The fish soup bowls were large, hot and bubbling with all kinds of fish my mum enjoys (I don’t. No reviews on this restaurant by the way, because I’ve forgotten its name. Besides, it would have come from a distasteful point of view rather than neutral.) and I gobbled up all her fat chips, burning hot. After this we got back on the dirty train and headed back to Toulon where we were at a rush to get back onto the ship lest they leave before us (that has happened before to people, no joke).

I’m very glad to say that we have passed over 1100 views on our blog! Thanks to everyone who’s made this happen, and I’m so excited to see what the future brings. Keep your views coming!

Now, we’ve had people from all over the world, quite literally, view our blog, so to spice things up I’ve done a Top 5 of views from countries. I’ll do one every viewing milestone or so, so when we reach 2000 views be sure to tune in the post then.

So, in fifth place…

5. Singapore, with 22 views. Not too surprised about this one as my brother Lews was in Singapore for a while on business there and he did post one post about his events there. Can’t blame him too much, I suppose.

4. France, with 42 views. Honestly have no clue to how this occurred. But the most surprising of them all was…

3. Brazil, with 136 views. This was a huge surprise for me-last time I checked, Brazil was at the bottom with 2 views from their country. That was quite a few months ago, and I understand that some time has passed since then. Still, they’re almost topping…